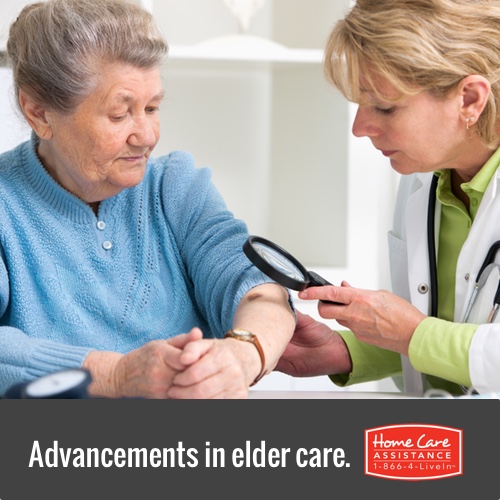 April is Parkinson’s Awareness Month, and as a leading provider of Parkinson’s care in Clearwater, we want to spend this blog discussing a new test that could have a huge impact on how Parkinson’s and Alzheimer’s disease is diagnosed.

Last month, researchers from the Central Hospital at the University of San Luis Potosi in Mexico released findings from a small study that show skin changes may indicate the early presence of Alzheimer’s and Parkinson’s.

The study, to be officially presented in April at the American Academy of Neurology annual meeting, shows that the skin may have elevated levels of proteins associated with these diseases that are detectable before other symptoms begin to manifest.

Skin biopsies were taken from a small group of people, including 20 who have Alzheimer’s disease, 16 who have Parkinson’s disease, 17 with dementia not related to these conditions, and 12 people with no signs of Alzheimer’s, Parkinson’s, or dementia. Besides these differences, the subjects were similar in lifestyle, diet, socioeconomic status, and other factors. The tests showed that the subjects with Alzheimer’s and Parkinson’s had seven times higher levels of a protein called tau and participants with Parkinson’s had eight times higher levels of a protein called alpha-synuclein compared with the healthy test subjects. Proteins in the brain have abnormal reactions when these diseases are present, so researchers theorize that this may be true in other parts of the body as well–including the skin.

While these findings are preliminary, they represent the potential detection of an important biomarker that could help determine who is at risk for developing Alzheimer’s and Parkinson’s. If the research can be replicated within a larger study, it could mark an important step toward early detection, preventative treatments, understanding the causes, and developing a cure.

Learn more about senior health and wellness by reaching out to home Care Clearwater. We are the area’s trusted provider of senior care, including specialized care for seniors with Parkinson’s, Alzheimer’s, and dementia. Our caregivers can promote a happy and healthy lifestyle through diet, exercise, socialization, and mental stimulation designed to slow cognitive decline. Give us a call at (727) 330-7862 and schedule a complimentary in-home consultation with one of our experienced and friendly Care Managers.