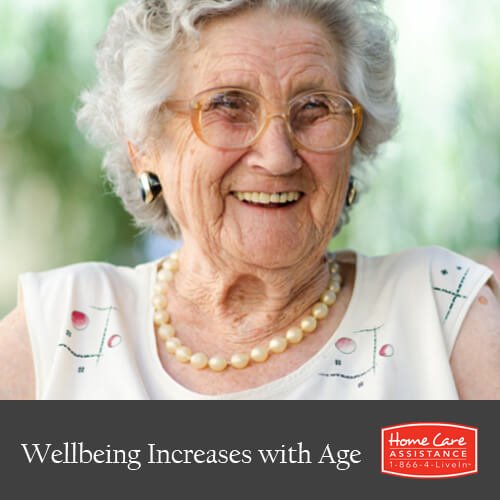 “A wealth of scientific and anecdotal evidence demonstrates precisely that it’s when people have surpassed many of life’s big landmarks that their overall satisfaction and happiness peaks,” according to a recent Huffington Post article¹. The article goes on to say that most adults experience two peaks in happiness during their lifetime, one during their 20’s and another around the age of 69.

Another article on the same subject published in Psychological Science² detailed the following observations:

“People seem to develop better skills for regulating their emotions as they age. For example, older people often have smaller and closer social networks than younger people; this may show that they’re choosing to put themselves in pleasant situations with people they like. Studies have found that older adults pay more attention to positive information than to negative information, which may improve mood. Also, some evidence suggests that older people are better at predicting how a certain situation will make them feel, which gives them a better chance of choosing enjoyable situations and avoiding unpleasantness.”

We all know that happiness is a state of mind, but it is one that we are oftentimes able to control. This interesting study found that overall happiness tends to be lower in our younger years – usually due to stress associated with work, busy lives, emotional turmoil and financial instability. However, there’s reason to hold on to hope because happiness tends to increase during the later years in life, especially in our 60s.

Generally, because of their many life experiences, senior citizens have learned to handle life circumstances with better problem solving skills and overall acceptance, regardless of the outcome. Older people also tend to manage their emotions better, not getting as angry or upset when difficulties arise, as long as they’re not suffering from a cognitive condition requiring assistance from an in-home Dementia Care Clearwater.

I think we can all agree that our view of what we find to be satisfying and fulfilling shifts later in life, adding to our overall level of contentment. For this reason, getting older doesn’t have to be something we dread; in fact, the future looks brighter as we age, especially when aging adults in Florida have occasional help from an  hourly caregiver in Clearwater.

If you or an aging loved one could use some in-home assistance to help further enhance quality of life and overall well-being and happiness, turn to the trusted professionals at Home Care Clearwater. For more information on our 24/7 or hourly senior care plans, or to schedule a complementary consultation, please call 727-330-7862.

¹ Gregoire, Carolyn. “Here’s Scientific Proof That Life Gets Better As You Get Older.” The Huffington Post. TheHuffingtonPost.com