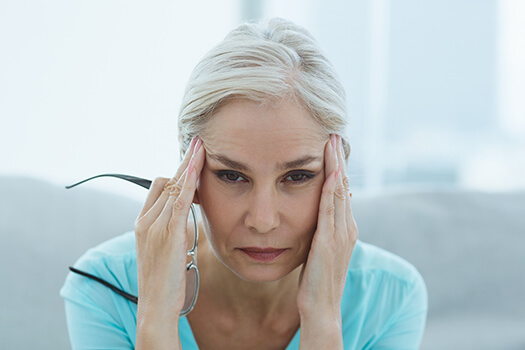 Dementia involves cognitive malfunction in the brain because of cellular damage or insufficient blood circulation. Over time, seniors with dementia display memory loss, personal care deficits, personality changes, and diminished thinking processes. Seniors can face a variety of challenges as they age, many of which can be mitigated with the help of professional in-home caregivers who provide high-quality Home Care. Clearwater families trust in Home Care Assistance to help their elderly loved ones age in place safely and comfortably.

Ongoing evaluations of seniors who have cognitive impairment demonstrate that certain symptoms may indicate the early stages of dementia.

Observing a senior biting an apple can be the key to predicting the onset of dementia. A group of researchers from Karlstad University and the Karolinska Institute in Sweden assessed 577 seniors over the age of 76 and learned that aging adults who found it difficult to chew hard foods were at a greater risk of developing cognitive deficits. The Swedish scientists theorized that because aging adults often have false teeth, fewer teeth, or no teeth, they chew less, thereby decreasing blood flow to the brain. The diminished blood circulation can lead to dementia.

During the 2012 Alzheimer’s Association International Conference, neuropsychologists shared studies that explained how a senior’s walking behavior could be an indicator of an early phase of dementia. According to the physicians, seniors who walked slowly also displayed signs of cognitive impairment on neuropsychological tests. Using imaging studies and motion-sensor technology, researchers found aging adults who walked slower had smaller brain volumes, which is a common indicator of dementia.

In 2011, scientists conducted a 5-year study of 1,300 healthy senior women over the age of 75. By the end of the study, 39 percent of the participants had developed mild cognitive problems. Further evaluation showed 80 percent of these women had abnormal circadian rhythms, which made them less able to function during the early hours of the day.

If you are a family caregiver and are not able to accomplish your duties for your senior loved one, consider hiring a professional caregiver. Caring for a senior loved one can be rewarding, but it can also be overwhelming for family caregivers who have other responsibilities they need to focus on. For these families, the perfect solution is respite home care. Safety Harbor families rely on our caregivers whenever they need time to rest, work, run errands, and even go on vacation.

Many adults know that excess body weight increases the likelihood of arthritis, cardiovascular disease, and diabetes. A 2011 study suggested having high body mass index (BMI) also increased an adult’s likelihood of developing dementia. The research studied 8,534 twins aged 65 years or older. Of the total number of participants, 350 were diagnosed with dementia and 114 demonstrated possible signs of the condition. Scientists evaluated the volunteers’ BMI over the past three decades and concluded 70 percent of the seniors who had gained excess weight earlier were demonstrating symptoms of dementia.

Depression affects a senior’s emotional wellbeing as well as  his or her cognitive health. Researchers published a study in the Archives of General Psychiatry that evaluated the medical records of over 13,000 people over six years. The results revealed individuals who experienced depression later in life were twice as likely to develop dementia. Adults who experienced depression from middle age onward were three times as likely to have vascular dementia as those who didn’t.

Dementia can be challenging for seniors to manage, but they can maintain a higher quality of life with the help of professional dementia care. Safety Harbor seniors can benefit greatly from the Cognitive Therapeutics Method (CTM), an activities-based program designed to slow cognitive decline and delay the onset of dementia. CTM is included at no additional charge with any of the in-home care plans provided by Home Care Assistance. Contact us at (727) 330-7862 to learn more about our services and to set up a free consultation.